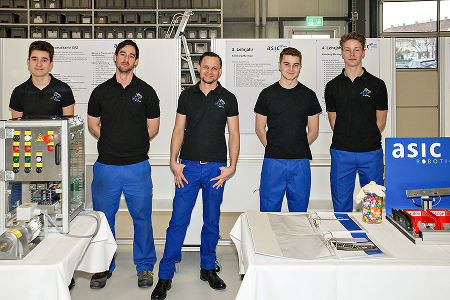 With the participation of the numerous business partners who appeared, Asic Robotics AG celebrated the opening of their new production hall on Friday, February 19, 2016.

Within a period of only 9 months the production capacity was doubled at the previous company location in Burgdorf - resulting in an additional production hall as well as larger storage and personnel facilities with a total floorspace of 1700 m².

At the opening of the ceremonies, representatives of Asic Robotics AG as well as the City of Burgdorf spoke to the guest present. During the subsequent guided tours through the production plant and offices, the guest were able to get an glimpse of state-of-the-art facilities for automation and robotics. In addition to the tours, the team of Asic trainees demonstrated to the guests their course of occupational training to become automation technicians. At the ensuing cocktail party the guests had an opportunity to exchange opinions and speak with the staff at Asic Robotics AG.